Helicopter parents were all the rage in the early 2000s as the Millenials first headed off to college. These dedicated parents are known for hovering over their children and then swooping in to rescue them at the first sign of struggle. They cultivated high performing kids who expected (and often received) top grades. More recently, parenting has trended toward a new type of gadget: the lawnmower. Known as Lawnmower Parents, they have a compulsive tendency to remove obstacles from their children’s paths–mowing down potential difficulties before encountered by their offspring.

Naturally, we as parents want to keep our children safe, protected, and give them the best lives possible. Of course, Lawnmower Parents are acting with loving intentions, trying to shield their children from the adversity and discomfort they may face in the world. However, it often produces the opposite effect. By interfering with the disappointment, failure, and heartache that is inevitable in life, parents are depriving their children of valuable lessons. These lessons will help kids grow and build the resiliency they need when facing the often more challenging world of adulthood. Although it may seem counter intuitive, allowing children to experience negative feelings and consequences can be one of the most loving things a parent can do.

Preparing for Challenges, Not Eliminating Them

Being a parent is a constant balance between protecting your children from their own impulsive or destructive decisions and allowing them to feel the repercussions of their choices. Early involvement, by setting limits and following through, is important. However, the focus should remain on preparing children for the inevitable discord they will encounter and not defeating it for them before they ever have to face it.

Parents facilitate autonomy in their little ones by holding appropriate boundaries and oversight. As time goes on, it is essential to give both independence and also responsibility to your children. Allow them to feel empowered by making the choices and accepting the results–even if they “fail.” Allowing children autonomy  to make their own choices empowers them to trust themselves and gives them the confidence they need to succeed in a difficult world. Problem solving, risk taking, and handling interpersonal conflict in a kind, honest and assertive way are skills that need practice. Additionally, a parent who removes obstacles or is constantly rushing in to the rescue and/or blaming others for their children’s setbacks can breed an attitude of entitlement. This never serves the child in the long run. 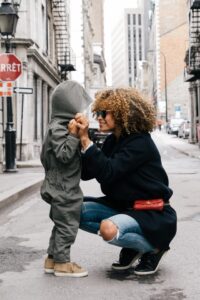 Often, the parent’s own feelings of inadequacy are at play. It is important for them to understand what it would mean about them, as parents, if their child struggled or had to deal with the outcome of a poor choice. When parents take too much responsibility for their children’s feelings, they may not be acknowledging their own in the process. Perhaps, these parents are unable to manage their own discomfort with imperfection, failure, embarrassment and heartache. Therefore, they overcompensate for their children, so they do not have to feel it themselves. This usually comes with a price to the parent: immense emotional effort to prevent the unpreventable.

Our children are looking to us, as parents, for examples of how to deal with difficulties in life. If we show them that experiencing painful emotions–like fear, anger, sadness and grief– are normal and usually fleeting, we can help teach them how to cope with these feelings in adaptive ways. As a result, they trust such emotional experiencing will lead to positive solutions and outcomes.

Providing Comfort without “Fixing It”

Ultimately, kids need a caring environment that feels safe enough to experience the good, bad and ugly of their choices. Parents who resist the urge to run interference or rescue their kids from “mistakes” help cultivate accountable, responsible adults. This in turn requires the parent remain present but also check their involvement in their children’s lives, managing their own discomfort when watching their child fail or feel distress. Unconditional love and consistent boundaries are both essential to creating a balanced relationship between parents and children. Striking this balance allows everyone to thrive.

The Gift of Failure by Jessica Lehey
How to Raise an Adult: Break Free of the Overparenting Trap and Prepare Your Kid for Success by Julie Lythcott-Haims
The Self Driven Child: The Science and Sense of Giving Your Kids More Control Over Their Lives by William Stixrud and Ned Johnson
Brianne Billups Hughes is an Associate Marriage and Family Therapist and Associate Professional Clinical Counselor. She is a mother of one with another on the way. She has experience working collaboratively to balance dynamics between parents and their children and create healthier outcomes for all involved.